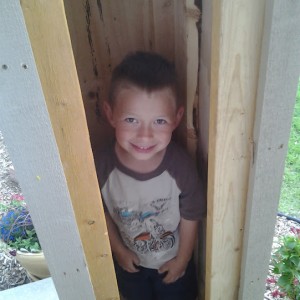 There was enough room for my son and a time capsule.

When installing our flag around Memorial Day I found out our porch pillar was hollow, could fit our 5-year-old son inside, and was perfect for a time capsule. It took a while to research materials suitable for a time capsule as well as set aside time to gather things together. This past weekend we completed packing it up and I put it inside the pillar ready for the year 2042.

After doing research I found that the key thing to remember when putting a capsule together is that acids and chemicals in the materials may react to each other over time. Not all plastics are stable and some may react with your contents. It is also a good idea to separate everything in its own bag so that if there is a reaction within the material itself it won't spread.

According to the Library of Congress, plastic suitable for archiving would be:

(PET or PETE, recycle code 1) jar with a screw-top lid of the same material. You can also use uncoated high-density polyethylene (HDPE, code 2) or polypropylene (PP, code 5).

I used plastic sleeves meeting this criteria as well as an organizer tub that locked tight. I then figured sealing the tub with silicone should work as well, but I'd recommend a little more research.

The Minnesota Historical Society web site provided some helpful information and recommends not burying or placing the capsule outside. They actually recommend storing it inside the house so that it is more climate controlled, but I figure the space I choose should keep dry. Check back in 30 years and I'll let you know.

My wife wrote a short letter to us in 2042 talking about our interests, ages, and new house. After watching A Conversation With My 12 Year Old Self last week I was inspired to formulate the following questions to the future occupants who may or may not be us:

Do you still use credit cards? (I have one enclosed for reference.) Do you still have cell phones, tablets, or other handheld communication devices? Is the Internet still used via a browser by going to an address like google.com? Is Apple, Google, or Microsoft still around? Anyone still use Twitter, Facebook, Pinterest, or Google+? Is there still cable or satellite television or is everything watched on demand? We get 1Gbps speeds on our home network (52Mbps wireless) what do you get? Hugo’s population was around 12,000 when this was sealed, what is it now? It seems commercial space exploration and tourism could take place in 10 years, has that happened? How many Batman movies have come out since 2012? How many times has the Batman origin been retold? Are there any news organizations left in paper, online, television, or radio form or is it all a bunch of independent bloggers online? Do we need news or is all knowledge feed to our brains directly? :) In 2012 Google was testing a driverless car. Do you have a driverless car? We still use gas as hybrids and electric are still expensive. What fuel do you use? I’ve been watching the Simpsons since their debut December 1989 (when I was 12), and they are still on in 2012. What year did the show finally go off air? Barack Obama is the President of the United States. Who is president in 2042?